First off, if you don’t have a 2x2x2 cube yet and you want one; I recommend a MoYu TangPo.

In this blog post I’m going to describe an easy method for solving the 2x2x2 Rubik’s cube. While this post might seem long at first, it’s really just two quick sequences of moves to learn plus a handful of situations to recognize. The 2x2x2 Rubik’s cube (also called the Pocket cube) is slightly easier than the regular 3x3x3 Rubik’s cube. A few of the tricks that are needed to solve the 2x2x2 can also be used when solving the 3x3x3 (or the Pyramorphix puzzle).

Given enough time, most people work out how to turn a single side into the same color. The thing that makes these 3D combination puzzles difficult is that if you want to preserve what you already completed/arranged you have less and less freedom to move pieces around. The fix for that problem is to apply sequences of moves (often referred to as “algorithms”) that will make some kind of change in the “still unsolved” part of the cube while at the same time making no changes to the “solved part” of the cube.

To describe the steps in each algorithm I will use standard Rubik’s cube notation (also called Singmaster notation). Basically each of the 6 sides are named by a single letter; F is the front side (facing you), L is the left side, R is the right side, B is the back (facing away from you), U is up and D is down. An algoritm is a series of moves and each move is either a clockwise or a counter-clockwise rotation of a single side. If X is an arbitrary side, then the clockwise rotation (one quarter) of that side is denoted X and the counter-clockwise move of that side is denoted X'. So U means turn the upper side clockwise one step and R' means turn the right side counter-clockwise one step. A full algorithm could be for example D' R' D R. Sometimes U2 is used to denote U U. Finally, a specific corner piece can be denoted by a non-ordered combination of three letters, e.g. the upper right corner on the F layer can be referred to as FUR (or RUF etc).

The 2x2x2 solution I will describe here uses two such sequences of moves, both of which can be used (along with a few other tricks) to solve a 3x3x3 cube as well. In addition to knowing these sequences of moves, you also have to be able to recognize what state the cube is in and you have to know how to orient the cube before performing the sequence of moves. 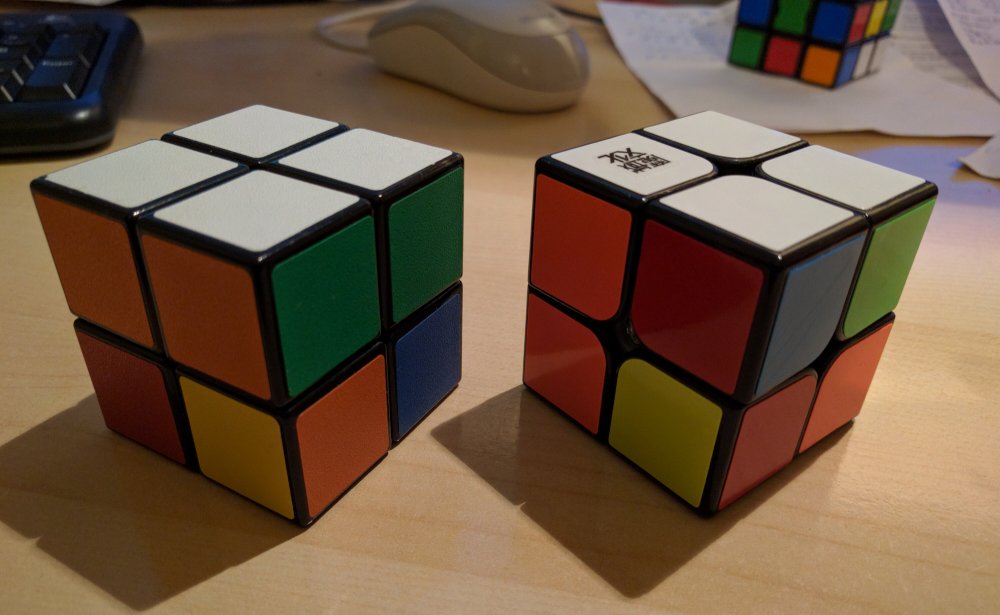 The first step in solving 2x2x2 is to solve the first layer. Most tutorials on the internet start out by solving white first, so when you’re solving the cube for the first time it’s helpful if you do that as well. Solving the first layer is pretty easy so you can probably do it by playing around with it a bit without following any specific steps. The general idea is to keep the solved white pieces in the top layer and then dip down to pick up additional pieces as necessary from the lower layer. For exampe, in the cubes below you could do D L D' L' and D' R' D R to complete the white sides: 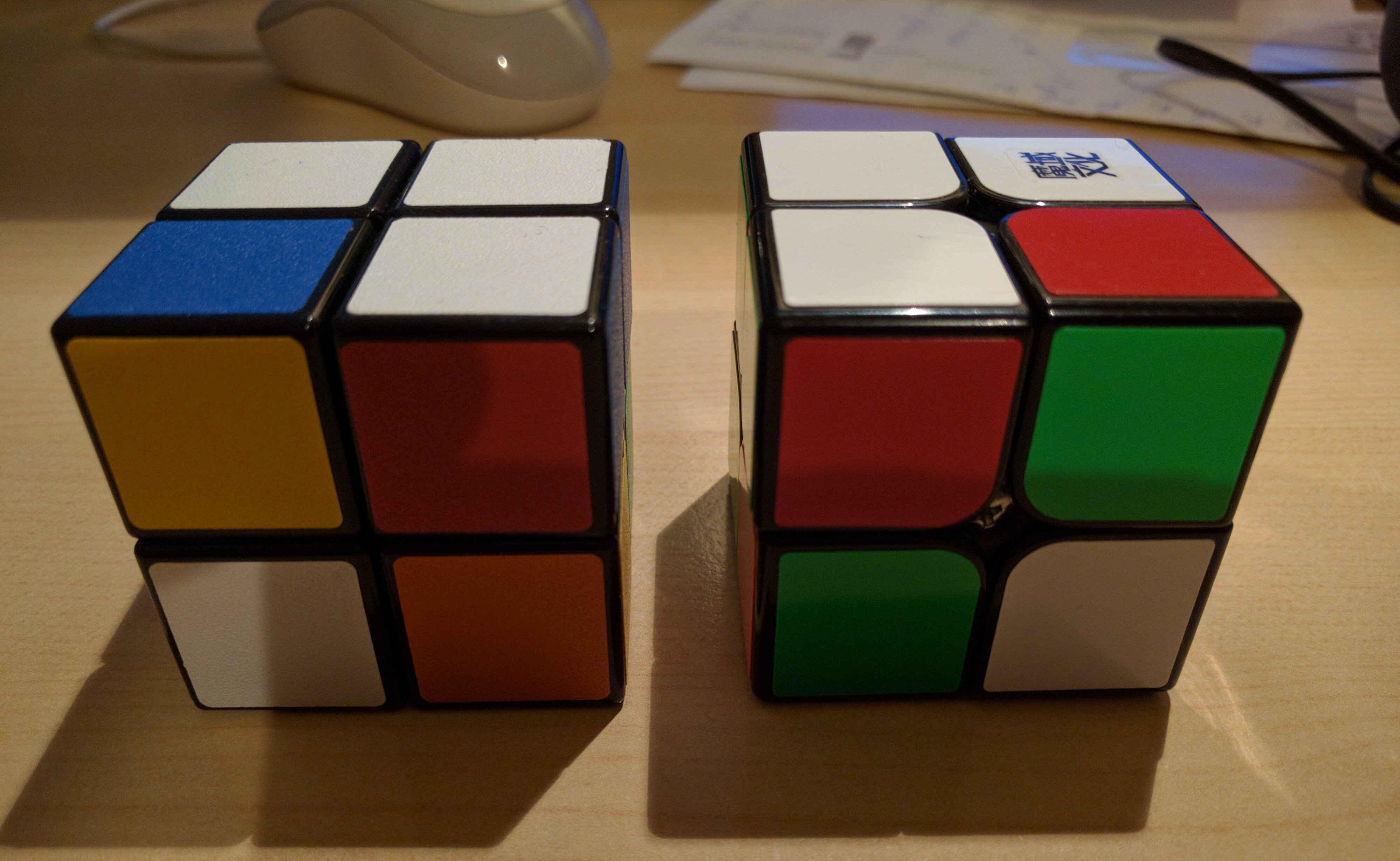 Once you have solved the first (white) layer, then place the cube up side down and get ready to solve the yellow side (we’ll do the “yellow side” first and then convert the “yellow side” into a solved “yellow layer” later). White/yellow are opposite on most cubes, as are blue/green and red/orange. Though, if you find a corner piece that has both white and yellow you have a non-standard color scheme, and then you need to work out what the opposite of white should be by studying the corner pieces.

Solving the first (white) layer means that no yellow pieces are left in that layer, and this in turn means that there are yellow somewhere on each of the non-layer-1 pieces (sometimes one the side, sometimes up top). This next step will reorient all the yellow pieces, creating a complete yellow side (not a layer). The sequence of moves we’ll use to do this is sometimes referred to as an “OLL algorithm” (OLL = Orient Last Layer). There are several different algorithms one can use for this.

In general, you can learn to recognize a lot of different cube states along with a corresponding algorithm for each one. The more different kinds of states you can recognize, the fewer moves you need in total to solve the cube. The cube has a total of 8!*3^7/24 = 3674160 possible states, so in reality what you’re looking for is manageable classes of such states. People who compete in “speedcubing” tend to get faster by learning to recognize more states and memorizing more algorithms. Some algorithms are easier to perform on a mechanical level than other (and right handed people might prefer other algorithms compared to left handed people for instance), and some algorithms are easier to memorize etc.

It’s usually necessary to apply this algorithm several times (while holding the cube in a particular way depending on what state you’re in) to fully orient the last layer. The Sune algorithm is probably the most common algorithm to learn, it’s often featured in beginner guides. There is also another variant of it, called the Anti-Sune but we’ll stick to just the regular Sune in this guide. The algorithm was named Sune by Lars Petrus who used it, along with two other algorithms (Niklas and Allan), in the “Lars Petrus System” which is a more advanced/quicker way to solve the 3x3x3 Rubik’s cube.

For example, if you have state 3 (arrow) and you perform the Sune algorithm you will end up with state 4 (tank). All the states transitions look like this (each arrow represents one invokation of the Sune algorithm):

It’s important that the U layer is oriented exactly like shown in states 1-7 so sometimes the cube must be turned between two Sune invokations. For example, if you have state 7 (CCW Thrusters) configuration but you hold it tilted 90 degrees to the right like this:

…then doing the Sune will bring you back to state 2 (Headlights) which is …undesirable.

The cubes below is showing you state 2 (Headlights) and state 7 (CCW Thrusters): 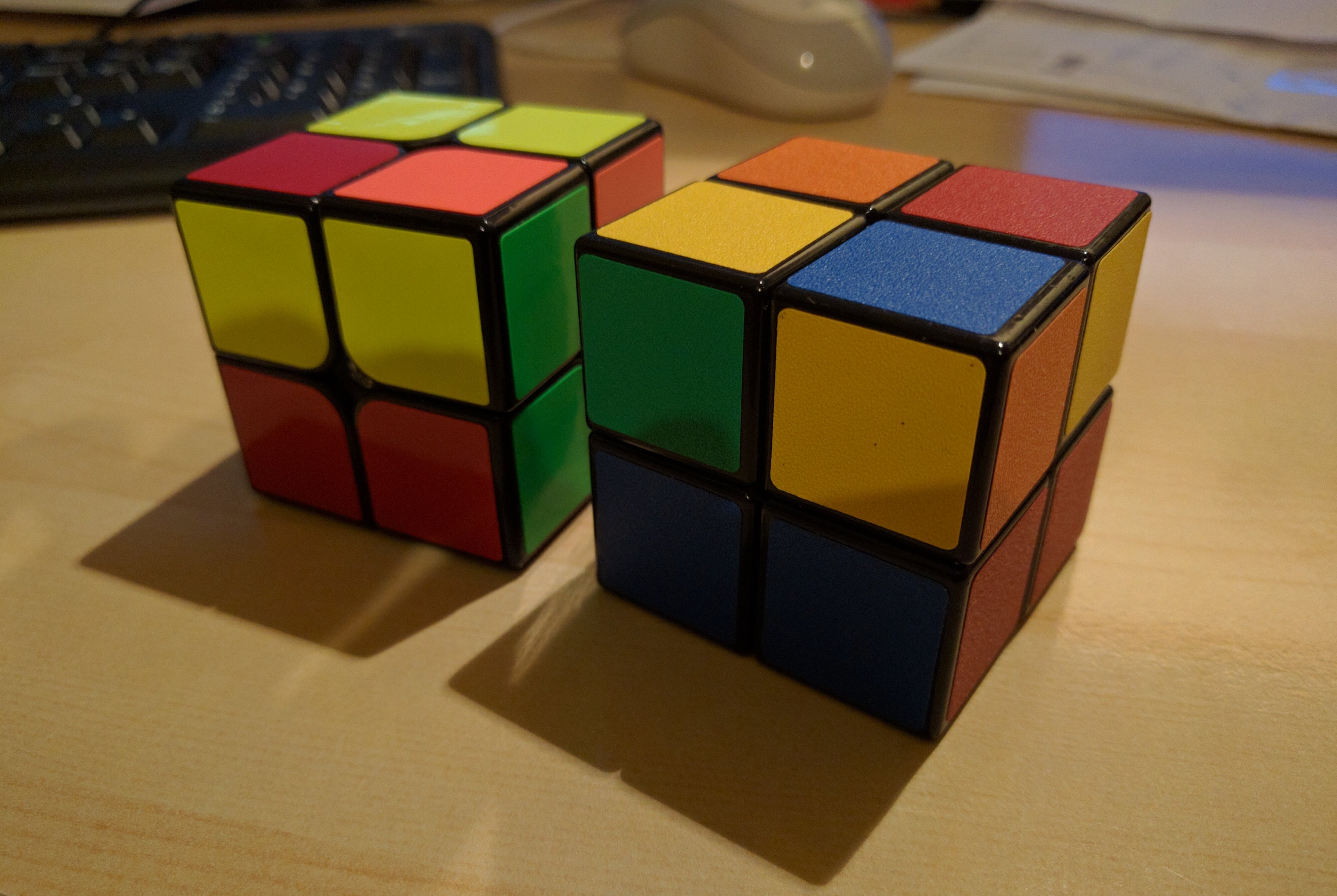 When you arrive at state 8 (yellow side solved), you are done with the OLL step. Time for the PLL (Permute Last Layer) step where you go from a solved yellow side to a solved yellow layer. Now you’ll find yourself in one of three situations: 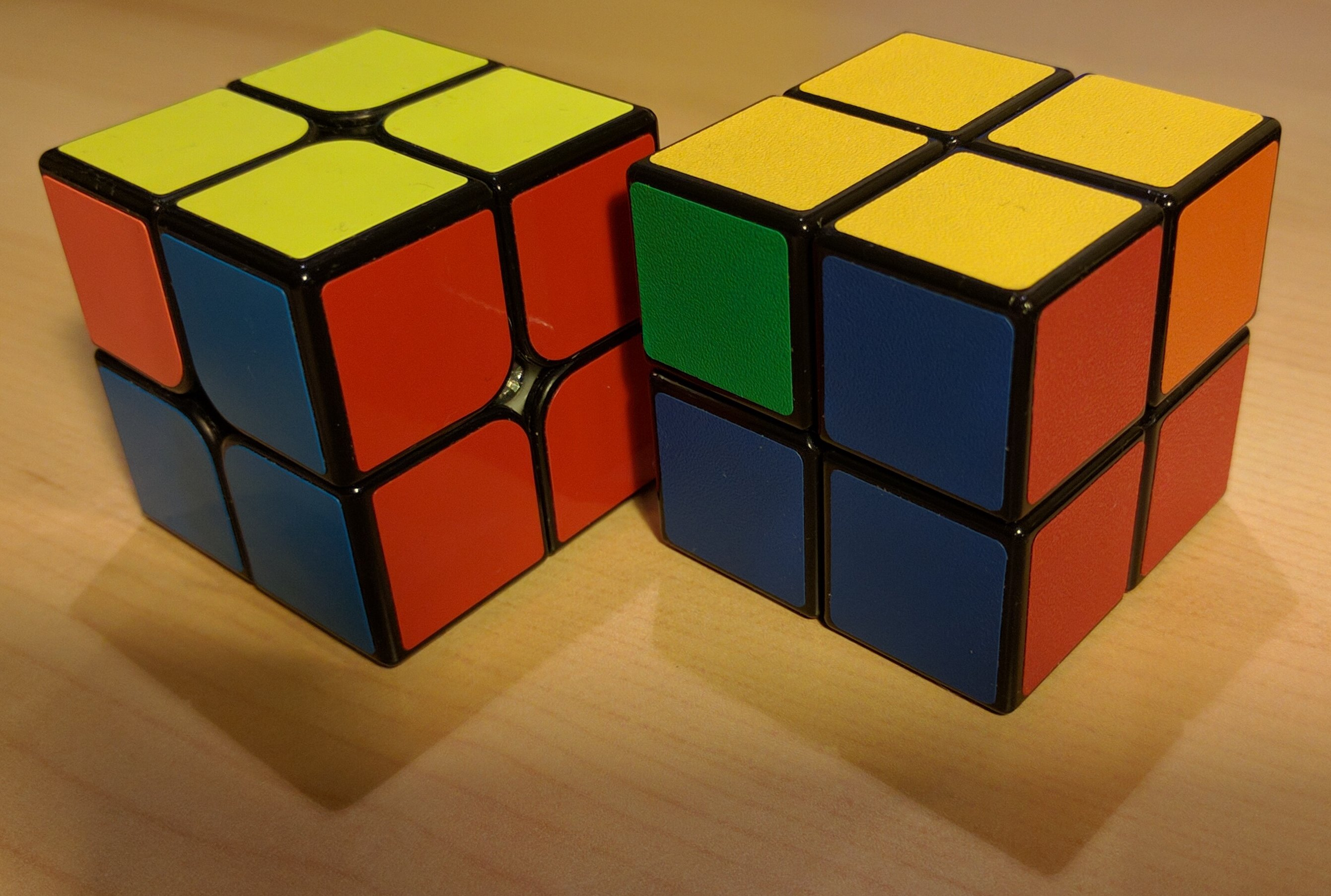 To solve the cube in situation #2 we need to find those two adjacent pieces on the side of the yellow layer that has the same color, rotate the yellow U layer until there is a whole side with that color, then we orient the whole cube so that this solved side is R (you should now have solved white on the D side, solved yellow on the U side and another solved side with some color on R. Then we do a single U' rotation, and after that we perform the algorithm L' U R' D2 R U' R' D2 R2. This algorithm is often referred to as an Aa permutation. What it does is that it rotates the positions of all corner pieces in the U layer, except for LUF. This means that RUF moves to LUB, LUB moves to RUB and RUB moves to RUF. When you just rotate the yellow layer the order of the pieces in that layer obviously does not change, but the fact that LUF stays put during the Aa permutation means that RUF gets to move ahead of LUF in the order. So another way to look at it is to say that this algorithm sort of switches positions on the LUF and RUF corner pieces within the order that they appear in the U layer. This is why we are holding the two pieces with the same color on the side of the yellow layer away from us; the order of these pieces are already correct.

Finally, to solve situation #3 where two of the yellow pieces have been swapped diagonally we use the same algorithm as in step #2 but we can hold the cube in any direction as long as we have the yellow side upwards. In this case the Aa permutation will take us to situation #2 (so we’ll need to repeat the algorithm one more time to solve the cube).

I hope this was sufficiently detailed to actually get your cube solved! Happy cubing..