I have compared1 few different tools for unit testing Javascript code. The frameworks I looked into were QUnit, Mocha JS, tape, AVA, Jasmine, Karma and Jest. I wrote a few testcases and then ported these to each framework. The testcases I wrote were meant to detect defects in various kinds of functions, for example:

Before we dig into the implementation of these test scenarios in each test framework, here is a table summarizes a few basic facts:

If you plot the commit count of each project over time it’s clear that QUnit and Jasmine are the oldest projects, and also that there is a very large amount of commits landing in the Jest repository right now (and have been for quite some time now) compared to all the other frameworks:

Another interesting thing to look at is the weekly download count on npm for each framework over time; Mocha is the most commonly used framework by a very wide margin. And if we dig into recent growth numbers (looking at from 2017-01-15 up until today) we see that Mocha weekly downloads increased by 206K (up 19%) while for example Jest added 195K new weekly downloads in the same period (which for them was an impressive 145% increase in less than 5 months!): 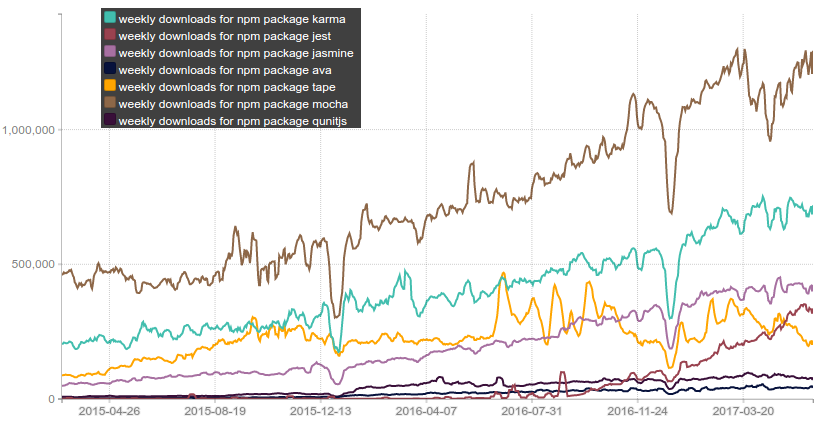 Below are some things I noted while writing sample testcases using these frameworks.

The first framework that I looked at in-depth was QUnit. This is one of the oldest unit testing frameworks for Javascript. It was originally developed to test jQuery and jQuery UI, but was later extracted into a separate project that does not even depend on jQuery. Unfortunately while writing my first few testcases for QUnit, I ran into a bug! If you have a testcase that calls a function with an asynchronous callback, but the function forgets the invoke the callback; then QUnit terminates with exit code 0 and doesn’t even print the passed/failed summary. I bet many CI systems would interpret that as a PASS, so it’s a show stopper bug imo. The testcase illustrates the problem:

Later I found that this bug was discovered and filed on Github in March, but nobody has had time to fix it yet: #1132. A workaround for the bug is to set a global default timeout using QUnit.config.testTimeout = 2000 or similar.

On the plus side, QUnit was able to correctly handle the “accidental double callback” scenario (and doing this also without me having to declare the expected number of assertions) by failing the testcase due to assert + doneFunc being called after the original call to doneFunc(). It should be noted that QUnit does offer an “expected assertion count” feature available though, useful for more advanced test scenarios.

There was also some minor nitpicking issues that I noted while writing the rest of the testcases for QUnit:

Mocha was started in 2011 by Tj Holowaychuk, the same guy that founded ExpressJS, co, commander.js, koa and a bunch of other highly successful NodeJS projects, and who then switched to golang three years ago. After its inception, the project quickly grew into a comprehensive test framework that covers a lot of different testing needs, and a large number of people have contributed to its success over the years (roughly 15 unique authors shows up in the git log each 60 day period). Lately though, the Mocha JS project has been having some problems finding developers to keep up with maintenance, their GitHub page current says “we’re currently unable to merge most pull requests due to lack of maintenance resources.”

That said, this test framework is quite mature. It allows you to customize which type of assertions you use and which test result reporter you use etc. There is also plugins for IDEs/editors like emacs and IDEA and so on.

When I tried porting my testcases to Mocha JS I wasn’t really satisfied with how it handled the “accidental double callback”. For example, if I did:

Then the default reporter (from Mocha 3.3.0) shows this result: 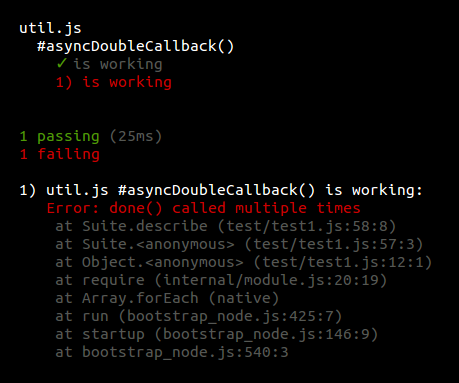 The tape GitHub page starts with testling-ci badge that hasn’t run since 2014, proudly claiming to support “Chrome 29”. There also hasn’t been a lot of commits made in the tape git repository lately. It was slightly annoying having to t.end() or t.plan() all testcases. Also I didn’t like that tape aborts the entire test suite if a single testcase throws, but it was easy to “fix” by switching the require('tape') to require('tape-catch') instead.

Note that tape, unlike Mocha, prints the number of assert passes/fails in the summary so everything is technically correct here in some sense.

Update 2017-07-12: As mentioned by Stefan Maric in the comments below; there is also a test framework called node-tap which is similar to tape in a lot of ways but with a few key issues fixed. Even though node-tap has fewer NPM downloads, npm uses node-tap for testing. If you like tape you should also have a look at node-tap before you decide which framework to use.

AVA describes itself as “futuristic” and unlike the other frameworks it runs tests in parallel, supports (and promotes) testing using ES2017 (and even post-ES2017 features like Observables). It also has extremely good assertion output, much better than the previous test frameworks. For equality of strings and deep equality of objects it shows diffs to highlight the difference between actual and expected. When my buggy callback function delivers the wrong value causing a t.is(actual, 'foo') assertion to fail, then it immediately highlights the source line where that bad value came from:

While porting my testcases to AVA, I did hit one bug (filed as #1377) in AVA related to timeouts (for the test scenario where a function forgets to call its callback).

Jasmine is a very old framework (first commit is from 2008). It was influenced to some extent by Ruby “RSpec”. Offers test doubles using spies built-in (in other frameworks you need to import something like sinon.js).

When I ported over the testcases to Jasmine, I found that, unlike the four previous test frameworks, it happily reports PASS in the “accidental double callback” scenario even if done() is called twice:

Jasmine also does not offer any assertion planning feature. At some point in 2014, somebody opened a GitHub issue (#626) asking for this to be added but the issue was closed by the maintainers because “they’ve not heard about this request before” which is unfortunate. They offer call counting for test double spies with callThrough, but using those for this scenario would be cumbersome and inefficient.

Karma is not a test framework per se, but rather a test runner that can take a test suite written in Mocha, QUnit or Jasmine and then run that suite in parallel on multiple browsers (desktop or mobile, and also including JSDom, PhantomJS and headless Chrome). All browsers report back results that are then presented as terminal output. It can also watch your test directory and automatically rerun the tests each time you update a testcase. Karma is the test runner used by Angular JS and was developed by the Angular team at Google. If you want to run your tests in browsers, then you should probably be using Karma regardless of which of the frameworks you pick (except for Jest, more on that below).

Jest is the test framework and test runner that is used by the React project and consequently by many libraries, tools and web apps implemented using React. The fact that it’s used by and backed by Facebook lends it both credibility and likely resources. Among the top 10 contributors to Jest, everyone except two works at Facebook2. It seems like a large part of the work is done by Chris Pojer tbh.

Jest started as a test runner wrapped around Jasmine, and the assertions still looks like expect(foo).toBe('bar'), but now there are few traces of Jasmine left. Jest doesn’t have support for running tests inside a real browser, cpojer shared some thoughts around this here and in issue #848. One really cool feature of Jest is snapshot testing, which helps you detect regressions in your output (either React component trees serialized to text, or for example an AST serialized to text if you’re working on a source transformation tool).

When I tried to port my testcases to Jest, I quickly ran into a Jest bug where assertion failures inside callbacks were suppressed (I was left with a test that timed out for no apparent reason and I had to do some digging before I even found the suppressed errors). I originally filed this as #3519 but it turned out to be a duplicate of #2059. If your async code uses promises instead of callbacks, this issue won’t affect you. If it’s possible, a nice way to escape the problem is simply to refactor to your old callback based functions to use promises instead. However, if you absolutely need to test functions with callbacks (e.g. maybe you just inherited a big legacy code base and you want to write testcases before you refactor, or maybe the callback API is used by third-party code) then the status quo for Jest seems to be that for any assertion inside an asynchronous callback you have to wrap the assert inside a try/catch that explicitly calls fail instead (like they do in lerna unit tests here). Another workaround would be to temporarily wrap the callback in a promise inside the testcase:

As seen in the commit count chart earlier, there seems to be a lot of momentum behind Jest right now. This is also reflected if you plot the number of active developers in each project (i.e. for every date X, the Y-value is defined as the number of unique e-mails seen in git log from X - 365 days up until X). That plot looks like this:

The number of developers involved in Jest increasing very quickly, they must be doing a lot things right when it comes to community building. I also looked at “the number of people which more than 50 commits” for each framework and Jest comes out highest there too with seven such developers so this is not all “one-off drive-by patching” either.

I was surprised that I hit so many little bugs / issues when trying to use these testing frameworks. Maybe the best choice is to do like TJ and switch to Go? :-P Staying with Javascript, I think it’s hard to ignore the momentum behind Jest. It would be awesome if someone fixed #2059 though. Then again, Mocha seems to work well enough for a lot of people.

3: The median "Issue Resolution Time" and the fraction of open issues among all issues, are both computed using the excellent service Is it maintained?.

4: Contributors need to sign a Contributor License Agreement (CLA) before patches are merged into Jest, and along with the BSD-3-Clause there is a patent grant which can be revoked by Facebook under some circumstances, see details on Wikipedia.